Discover Via Francigena with a route map

tourist route by mountain bike along the Via Francigena from Camaiore

Discover Via Francigena with a mountain bike

Tourist route by mountain bike along the Via Francigena from Camaiore

From the hotel, we start with the MTB on a wide and comfortable paved road. Riding smoothly we pass through the coast to get to the route of the "Via Francigena" (or Via "Romea" if you traveled to the South). The Via Francigena was the early-medieval equivalent of our highways with related services to the traveler like accommodation, taverns, "hospitals&, civil, military and religious structures that still mark the route nowadays.

In addition to pilgrims, merchants and soldiers, the Via Francigena transmitted ideas, culture and science contributing to consolidate a model of European recovery, after the barbarism and "the dark ages&. Naturally, we can see only some of the roughest original route, because today is mostly paved.

We will accurately follow the official route towards Lucca, from the Longobard Vallecchia to Camaiore on asphalt, dirt roads and mule tracks stopping in Pietrasanta for the deserved lunch at the canteen worker. Return to the hotel in the late afternoon.

This day trip is organized in collaboration with: 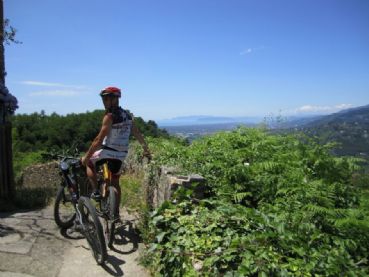 The village of Camaiore is located at the bottom of a valley surrounded by hills, as well as the northern Appennins.

Stazzema is the smallest town in Versilia and the higher up, nestled on the slopes of Mount Matanna in the heart of the Apuan Alps.

Torre del Lago takes its name from a tower, stood near the Lake of Massaciuccoli between the XV and XVI century

Viareggio and its carnival

Florence artistic and cultural heritage is very valuable, so that the historic center of Florence has become UNESCO World Heritage Site in 1982.